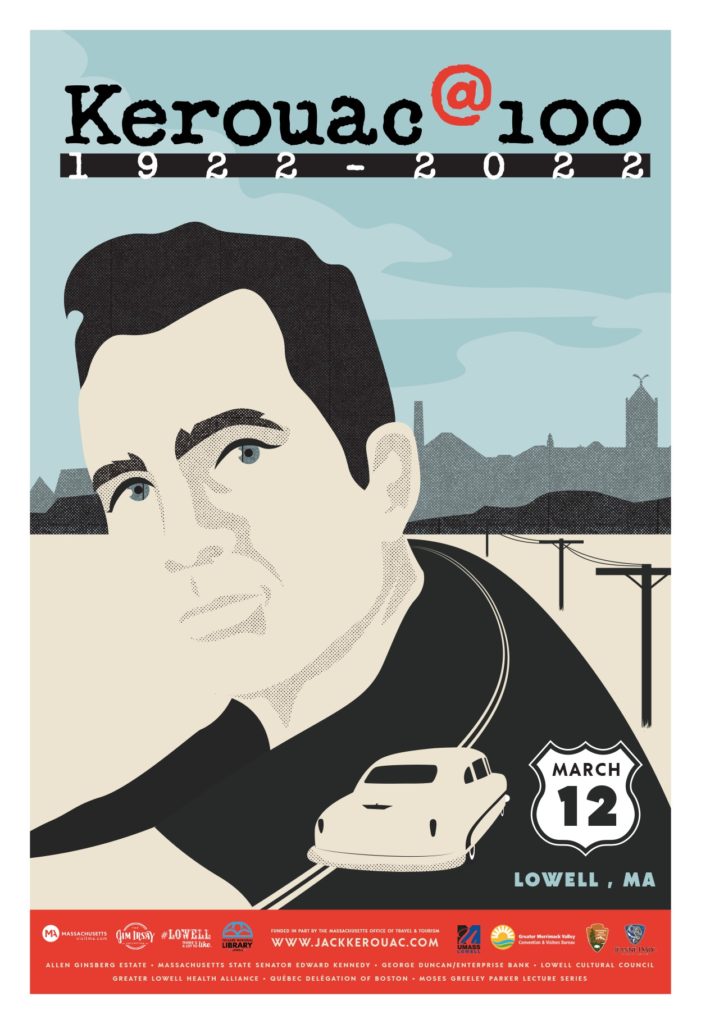 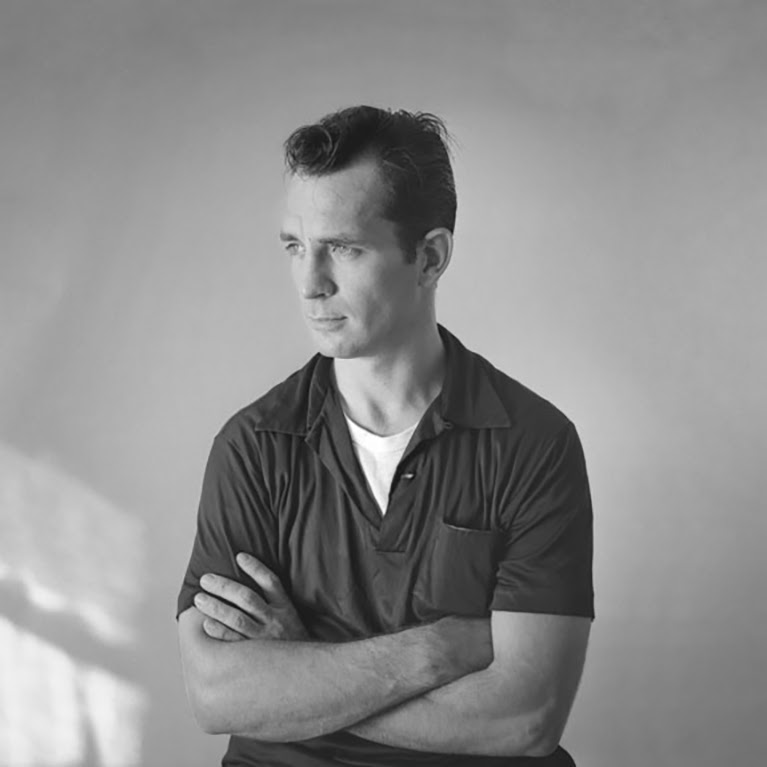 TAKING PLACE IN HIS LOWELL, MA HOMETOWN STARTING IN MARCH

Events to include return of original ‘On the Road’ scroll on loan from the Jim Irsay Collection, guided bus tours, musical events, readings, art galleries & more.

To mark the centennial birthday anniversary of world-renowned “Beat Generation” pioneer, novelist, writer, poet and artist JACK KEROUAC, THE JACK KEROUAC ESTATE and the Kerouac @ 100 Committee have planned an array of events and happenings to take place in his Lowell, MA hometown starting in his birth month of March. See a full list of happenings and details below.

“March 12th, 2022 will be the 100th anniversary of the birth of Lowell, Massachusetts’ favorite native son, Jack Kerouac, and folks the world over are weighing in on the enduring legacy of his work,” states Jim Sampas, Literary Executor of the Estate of Jack Kerouac.

“The celebration of his centennial this March in his hometown will include important artifacts, such as an exhibit of the original ‘On the Road’ scroll manuscript, and for the first time ever in one place, all the photographs of Kerouac taken by one of his dearest friends, Allen Ginsberg.

There will be readings, film screenings, and musical performances, all paying tribute to one of the most important authors of our time, and the versatility and openness of Kerouac’s work.”

Kerouac has been praised and cited as an influence for several of the most well-known public figures in music, entertainment, literature, fashion, and politics ranging from President Barack Obama to David Bowie to Francis Ford Coppola to Hunter S. Thompson and many more.

Kerouac was recently the inspiration for DIOR HOMME creative director Kim Jones’ 2022 fall show with a collection that nodded to the Beat Generation style and featured an 80-meter-long facsimile of Kerouac’s generation-defining literary classic ‘On The Road.’ See photos from the show in London via Vogue HERE.

The upcoming festivities will feature the return of a portion of the original 120-foot-long ‘On The Road’ scroll–which Time Magazine included as one of the best novels of the last 100 years—on loan from The Jim Irsay Collection as part of the exhibit ‘Visions of Kerouac’ which will be free to the public on Friday, March 18 at the Lowell National Historical Park’s Boott Cotton Mills Gallery. Further details are included below.

“The ‘On the Road’ scroll manuscript is one of the most important and fascinating manuscripts in American literary history,” proclaims Michael Millner (Director, UMass Lowell Kerouac Center). “American literature and American culture more broadly were never the same after ‘On the Road,’ and this is rare opportunity to experience the manuscript–and it is certainly an experience.”

FREE ADMISSION FOR ALL EVENTS

Reflections from the Road Art Exhibit

Join us on the eve of Kerouac’s 100th birthday as we read aloud 100 of his musical blues choruses and American haiku poems. Light refreshments and musical accompaniment. For further info and reader signup, please visit LowellLibrary.org.

“Music was important to Jack Kerouac as Jack was to countless music makers,” says Chris Porter, President of the Jack Kerouac Foundation Board of Directors.

“Both Willie Loco Alexander (who released his well-known song ‘Kerouac’ in the 1970’s) and Frank Morey have been significantly touched by Jack’s writings and their respective performances will be perfect finales to a special day of talk, poetry, and song celebrating Kerouac’s 100th birthday.”

Part documentary, part drama, this 1987 Canadian Film Board production weaves reenactments, archival film and photographs, and interviews with French-Canadian and American writers and artists of the 80’s (including Allen Ginsberg and Lawrence Ferlinghetti) to paint a portrait of Lowell’s thoroughly Franco-American novelist and poet.

A virtual bilingual panel on Jack Kerouac moderated by cultural journalist Tanya Beaumont (Radio-Canada) with panelists Herménégilde Chiasson (director of the film ‘Le grand Jack,’ based in New Brunswick), Susan Pinette (Director of Franco-American Studies at Canadian-American Center & Professor of Modern Languages at University of Maine, based in USA), Jean-Christophe Cloutier (Author La Vie est d’hommage and Associate Professor of English and Comparative Literature at University of Pennsylvania, based in USA)

Sponsored by the UMass Lowell Kerouac Center
Open Mic Poetry Reading with live jazz accompaniment, including a multi-voice selected reading from the Scripture of the Golden Eternity.

This unique special exhibit will include the return of a portion of the original “On The Road” scroll. The scroll in its entirety stretches to 120 feet and is one of the most extraordinary and highly valued manuscripts in American literary history. It will be on loan from The Jim Irsay Collection. Irsay, owner of the Indianapolis Colts, has a renowned collection which includes historic and iconic artifacts from rock music, American history and pop culture. The 24-foot portion will be available for viewing along with archival books, writings, personal objects, and photographs including never-before-seen images of Jack Kerouac taken by fellow Beat Generation pioneer Allen Ginsberg. There will also be a collection of photographs by John Suiter. More details on the exhibit location can be found here: www.nps.gov/lowe/planyourvisit/boott-cotton-mills-museum.htm

An Evening with David Amram

Acclaimed composer and jazzman David Amram–now in his 92nd year–will reflect on his days with Kerouac as he recounts them in his book ‘Offbeat: Collaborating with Kerouac.’ He will also show the film ‘Pull My Daisy,’ in which David appears and Jack Kerouac narrates.

The Town And The City” Festival

This two-day music and arts festival produced by Chris Porter will take place in various event spaces, bars, cafes and galleries throughout downtown Lowell, MA. The festival is named after Jack Kerouac’s earliest novel which was primarily set in this historic mill city. More info at www.thetownandthecityfestival.com

The October Festival features tours of Kerouac’s Lowell places–including many sites described in his Lowell-based novels-panel discussions, reading, jazz and folk music, films, open mike events, as high poetry competition, book signings, and more. Kerouac fans and scholars from across the United States and around the world travel to Lowell for the festival. More info at www.lowellcelebrateskerouac.org

Some additional events transpiring around the centennial celebration will include:

About the KEROUAC @ 100 Committee: