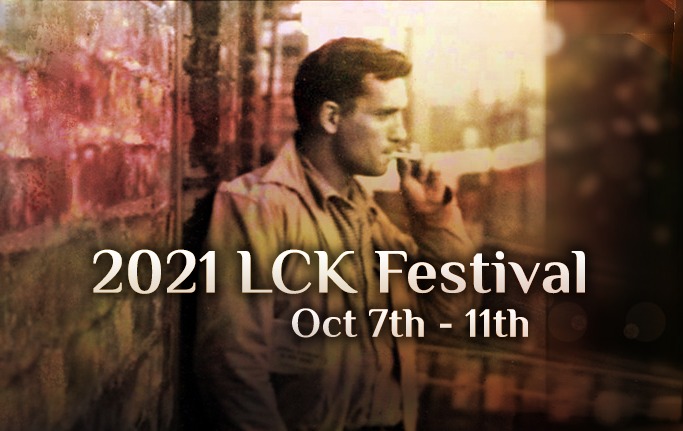 “Everybody goes home in October.”    Jack Kerouac: On the Road

Thanks To Our Supporters:

Special Thanks Also To:

Darrell’s Music Hall of Nashua, NH for providing the keyboard for David Amram
St. Anne’s Episcopal Church for hosting the Parker Lecture and the Amram Jam

Lowell Celebrates Kerouac will respect and uphold any conditions or stipulations that our host venues may wish to have in place concerning the COVID-19 pandemic. We strongly urge that those attending our events be fully vaccinated. Unvaccinated patrons are urged to wear masks at all indoor venues.
Thank you!

Posters from previous LCK Festivals will be on display at The Lowell Telecommunications Center at 246 Market Street during the Festival.

The Keep is the site of the former Nicky’s Bar, run by Kerouac’s brother-in-law Nick Sampas in the late 1960s.

This special event is being done in collaboration with LCK. A panel discussion on Jack Kerouac’s works and crafting musical meaning on setting his text to music, ending in a performance of three brand new works by Mark Berger, Karl Henning and Aaron Rosenberg.

8:00 pm: Music and Readings at the Warp and Weft

Musical performances by Mike Dion of the ODB Project and George Koumantzelis of Aeolian Kid.

Will include readings by poet Chath Piersath and novelist Steve O’Connor.

This is a GLTHS event and not open to the public.

ALL Gallery. 167 Market Street. An outdoor setting is available.

All His Life Was in That Line…An Artist’s 10-year Fascination with Jack Kerouac’s Words.

The Legendary David Amram and his band: Kevin Twigg on drums, Rene Hart on bass and Adam Amram on percussion.

A Remembrance of Roger Brunelle led by Richard Scott and Steve Edington.

This year’s Festival is dedicated to the life and legacy of one of LCK Founders, Roger Brunelle, who passed away this past February.

In case of rain this event will be held at St. Anne’s Chapel, corner of Merrimack and Kirk Streets

Includes the Kerouac birthplace and burial site at Edson Cemetery.

Leave from the Commemorative.

Led by Kurt Phaneuf in partnership with Lowell Walks.

Leave from the Commemorative.

Highway Historian Frank Brusca has researched Kerouac’s On the Road as to when and where he journeyed and the people with whom he interacted. Many readers of OTR imagine traveling side by side with Kerouac. But what if Kerouac had taken photographs on his journeys? Ten years of research by Frank Brusca have resulted in detailed maps of his travels and those maps inform us about what he saw. This presentation is a review of period photographs that show what Kerouac saw between 1947 and 1950.

Jack Kerouac is the only writer from Lowell to have achieved an international reputation. Contemporary Lowell writer, Stephen O’Connor, discusses Kerouac as a figure that may illuminate, influence, and at times overshadow the work of other writers from the Mill City. The public may try to define the Lowell writer as a “New Jack Kerouac,” or compare his or her work to Kerouac. O’Connor will also discuss his own connections to Kerouac, the Lowell background they share, as well as common influences and differences.

Masks required as per City Ordinance for City-owned buildings.

Featuring Lowell musicians Peter Lavender, Dave Norton, Bob Nash and Tom Mansur, who will be playing select songs from the music catalog of The Beatles.

Based in western Massachusetts, FlavaEvolution is a unique jazz quartet with horns and bass. They create a sound that crosses a chamber string ensemble with modern jazz, 1970s soul, and beautiful balladry.

A walking tour of the sites in Kerouac’s Visions of Gerard.

George Wallace is the first Poet Laureate of Suffolk County, NY and a former writer in residence at the Walt Whitman birthplace in Huntington, NY. He edits an on-line poetry magazine, Poetry Bay.

Upstairs at The Worthen. 141 Worthen Street.

Bring your Kerouac inspired poem or prose to read while accompanied by David Amram and his trio of Adam Amram, Kevin Twigg, and Rene Hart.

A walking tour of the sites from Kerouac’s Doctor Sax.

A tour of the Kerouac Sites of Nashua, New Hampshire.

The final stop is the St. Louis deGonzague Cemetery where Leo, Gabrielle, Gerard and Jan Kerouac are laid to rest.

Departs from the Commemorative at French and Bridge Streets

Last Call at the Worthen following the Loop Tour for any who are still in town and where we say “See you next year!”