Jack Kerouac, born in Lowell, Massachusetts, is one of the most important American authors of the 20th century. Kerouac is best known for his classic On the Road, a novel that captured the spirit of the time and continues to inspire readers.

Among Kerouac’s many published works are five novels that draw on his youth in Lowell in the 1920’s, 30’s, and 40’s: The Town and the City; Doctor Sax; Maggie Cassidy; Visions of Gerard; and Vanity of Duluoz. Kerouac became a writer in Lowell. He grew up in its neighborhoods, graduated from Lowell High School, and earned a scholarship to Columbia University.

In New York, Allen Ginsberg, William S. Burroughs, and others who formed the core of a movement that Kerouac named “The Beat Generation.” Kerouac became a symbol of American restlessness and the promise of the open road. His series of autobiographical novels, known as the Legend of Duluoz, is one of the major literary achievements of the past century. Kerouac shaped a unique literary consciousness that has influenced readers, writers, musicians, and artists for more than fifty years. He died in St. Petersburg, Florida, in 1969, and is buried in Edson Cemetery in Lowell. 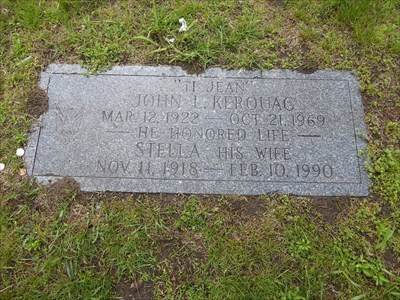 Once at the cemetery take the last entrance by the white gatekeeper’s house just before the Gulf Station.

After you’ve entered go left until you reach Seventh, then up 2 blocks to Lincoln.

You’ll find the marker close to the center of section 94, in front of the bush.